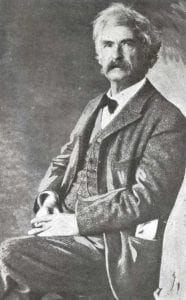 Mark Twain’s The Adventures of Tom Sawyer is a dense novel with many references to political climates, southern culture, and social structures. However, the aspect that I’d like to delve deeper into for analysis is the symbolism Twain employs. Tom’s games that he plays with Huck Finn have more intricate meanings, and taking the time to discover those could bring forth a quality analysis. A quote that has resonated with me thus far is “His aunt wept over him and asked how he could go and break her old heart so; and finally told him to go on, and ruin himself and bring her gray hairs with sorrow to the grave, for it was no use for her to try any more. This was worse than a thousand whippings, and Tom’s heart was now sorer than his body” (Twain, 60). This interaction highlights Tom’s guilt and his growth because he now has remorse about making his aunt hurt, and he feels the pain differently because it is not physical, but emotional. Tom grows in this scene because he suffers the consequences of his actions in a more mature way than whippings.

One thing that I think Twain does well is distinguish the narration from the conversations that Tom has. Twain’s commentary is sophisticated, whereas Tom’s way of speaking is not. Twain’s summaries of Tom’s thoughts and actions add a layer of depth to Tom’s life and how it affects him. Due to the simplicity of the dialogue, not a lot can be derived simply from reading the conversations, but more has to be explained by Twain. These contrasting levels of sophistication add a sense of separation between Tom and Twain that add to the third person perspective that this story is told in. 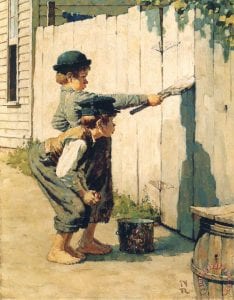 I enjoy how fast-paced this book is because Tom’s mischief keeps everyone on their toes. Tom is such a likable character, especially in his romantic endeavors. His mischief is charming, in a way, because it shows his independence, despite his Aunt’s persistence in keeping him obedient. I also like how gripping the stories are, especially with his showing off for a girl.

I don’t like the diction because it doesn’t seem to match the social standings of Tom and his family, but I’m sure there’s a significance within that has not occurred to me yet. Overall, I like the book so far, and to be honest, I was a bit worried I wouldn’t because it was initially published in 1876.